In 2002, the Republic of Ireland imposed a (EU) €0.17 tax on plastic shopping bags at check out to discourage bag usage because of concern that plastic shopping bags comprised 5% of the litter stream and the visual pollution was hurting tourism. Plastic bags, in fact, were a tiny fraction of litter at less than 1%.

The tax was very unpopular so the government had to keep increasing the tax to motivate change. What started at about 23 cents (CDN) per bag, ended up at 35 cents (CDN) per bag. It was cheaper to buy plastic bags for household garbage off the shelf than pay the bag tax.

Consequence: There was a 90% reduction in the number of plastic bags provided at checkout, but this did not lead to a decrease in the amount of plastic consumed or going to landfill. The bag tax produced the opposite environmental effect than intended. 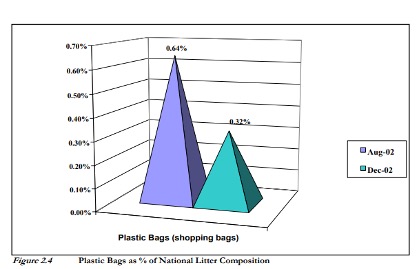 As with all bans (the tax was seen as a de facto ban), consumption of alternatives, in this case the paper bag, increased as did the consumption of plastic as consumers bought thicker plastic kitchen catchers (bin liners) to manage their household waste. The result was more material in the waste stream.

Result: No Litter Reduction, but an Increase in Plastic Imports

There was little to no change in litter. Bags comprised only 0.64% of total litter in the country, prior to the bag tax although they reported bag litter at 5% and 0.32% after the tax.

As noted, the bag tax led to a massive increase (+400%) of paper bags in the waste stream. (Source: U.K. Carrier Bag Coalition)

With little recycling capacity at all in Ireland (most of the waste is exported), more waste ended up in landfill.

The bag tax ultimately failed. Why?

First, there was no bag litter problem. The reality is that plastic shopping bags (according to Ireland’s 2001 litter audits) were only 0.64% of litter.1

Second, the Irish tax failed to take into account that plastic bags are a necessity and have high reuse for household waste. The result was that the tax forced consumers to purchase cheaper, thicker plastic kitchen catcher type bags off the shelf. Sales of kitchen catchers increased +77% which put a disproportionately high percentage of new plastic into the waste stream because the bags are thicker than regular plastic shopping bags.2

Plastic bags were seen as a symbol for the government to use to promote better stewardship of the environment by citizens. Ireland did not risk job loss. There would be little job impact with a bag ban or high tax. At the time, all plastic shopping bags were imported; there was no indigenous bag manufacturing industry.

Ireland had a poor record nationally on waste diversion/recovery (from 1990-1998, they recovered only 9% of their total waste) and at the time, a weak and underdeveloped recycling infrastructure. There was little capacity to recycle in Ireland. Most waste was exported to other countries for recycling or incineration.3

Was the Bag Tax a Success?

In terms of awareness building it was most likely successful. But it failed as an environmental initiative.

It didn’t solve the litter problem. But it did help Ireland to understand the nature of their litter and manage perceptions of a problem.

Consumption of plastic increased by 20.1% and Ireland ended up with more paper litter as stores switched to paper bags. (2011 National Litter Pollution Report) 4

The bag tax was extremely unpopular because it failed to recognize the necessity of bags for household garbage.

It was cheaper to buy plastic bags for household garbage off the shelf than pay the bag tax. These sales increased 77%.

The bag tax produced the opposite environmental effect than intended. The 90% reduction in the number of plastic bags provided at check out did not lead to a decrease in the amount of plastic consumed or going to landfill. The result was more material in the waste stream.

With little recycling capacity at all in Ireland (most of the waste is exported), more waste ended up in landfill. See Toronto Star article, “Tax cuts plastic bags in trees but not in dumps”. Deborah Dundas, Feb.1, 2007.

The Scottish government environment agency rejected the Irish bag tax as part of its two- year examination of plastic shopping bag issues because it had a number of negative, unintended consequences.

The UK Minister of the Environment, Ben Bradshaw, who testified at the Scotland Environment Committee said that there were too many “disbenefits” to the Irish bag tax—one of which was a 20.1% increase in plastic consumption (see below).

Source: Her Majesty’s Customs Department Importation Statistics on all bags imported in Ireland.

All About Reusable Bags